Trevor King has been involved with the Pottery since he moved to New York City in 2016, first as a Studio Technician, then as a teacher. Now, during his Fellowship from November 23rd through December 18th, he’s taking on a new role: filmmaker. King has been shooting footage of daily life at the studio and conducting interviews with staff, faculty, students, and affiliated artists to create a portrait of how Greenwich House Pottery and its community are maintaining the ceramic arts tradition, and pushing it forward. We spoke with King about his work in clay and film, and how his film is unfolding. 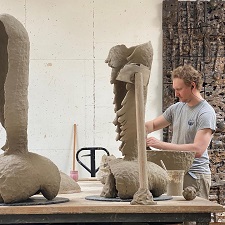 What themes do you tend to explore in your work?

I work with ceramics, sculpture, making installations, and video. Overall in my work there are themes of the passage of time, memory, history, and the way that objects and material can tell interpersonal stories and convey this enduring quality of the human spirit. My last major body of work was making ceramic objects based on drawings that my grandfather had made for me. They were funny doodles of valuable pieces of pottery that he’d see on the Antiques Road Show. He was thinking I could copy them and my versions would be worth as much. His drawings were totally wild hilarious interpretations of these pots he was seeing, so when I started making them it was an attempt at replicating the drawing rather than the initial idea. I displayed the drawings alongside the pots so people could see the collaboration that we were doing. It was about how art making in general is a way of making meaning and exploring what’s really valuable. In all my work I am to record the beautiful qualities of the world that I see.

The press release for your Fellowship says that you “use the methods of a documentarian to inform [your] work in sculpture.” How do you think the roles of documentarians and sculptors interact?

I think that’s something I’m still figuring out as I go. Pottery has such a significant place in human history; it’s the great archival art form. Its permanence is so useful in studying cultures from the ancient past. I think a lot of times sculpture is about trying to record everyday life in a more permanent material. The rise of the found object in modern and contemporary art also points to how objects of the present reflect something about us. That’s where I see the overlap with documentarians.

Your project for the Fellowship is working with documentary in a more traditional way — creating a video portrait of the Pottery. What got you started in film and what do you like to make films about?

I think what got me started was being around home videos. When I was growing up my dad’s role on vacations or holidays was being in charge of the camcorder, he was the documentarian of the family. The further I got involved with art making in any form, film was always a part of it in at least a small way, but I’ve devoted more energy to film in this past year.

Initially when we were at home during quarantine this past spring, I was thinking I should really be keeping some kind of record of this moment. I began this video piece where it was all based in the interior of my apartment, but with audio clips of the Brian Lehrer show playing on the radio and showing materials from everyday life that had new significance. It was one of those artworks when something clicks and it really effectively represented what I was feeling, so I wanted to do more work along those lines. I’m seeing the way that these tools can order attention and bring people close to the texture of something. It’s also not obscured by mark making; it’s a passive art making device, it perceives information, and I think that’s an interesting quality about it.

“This time has made me think about just how precious institutions like Greenwich House are. People need communities like this during these difficult moments.”

How is everything going with the documentary so far?

As I go through and edit all the footage I’m taking I’ve been realizing that, while there’s obviously a lot of images of the work people are making, it’s so much more about the personalities and the texture of the building and the community. I’m interviewing people I’ve known for years but I’m still learning a lot. For instance, I was just talking to a student who’s been taking classes at the Pottery since the ‘70s, and just within the past few weeks she decided to move from the Upper West Side down to the Village so she could walk to the Pottery, it’s that significant to her. I was talking to another student who had worked as a therapist his entire career in the NYC prison system and always had this idea that he’s going to make art when he retires, and Greenwich House has been his way of doing that. He said to me, “You know, part of retiring is rebuilding your identity and I was able to do that because of Greenwich House.” That person has been very cautious about COVID, so he’s currently taking three online classes to continue his study. There’s a lot of moments like that. The significance of the place cannot be overstated for those people.

What have you been learning about the Pottery now that you’re looking at it through the lens of a documentarian?

I was expecting to portray Greenwich House as the heart of the ceramics community in New York City, but what I’m learning as I’m doing this is that has maybe more to do with how valuable the Pottery is as a community than the work it does to push expression in the field of ceramics. Even in the midst of this pandemic there’s such a resilient spirit here and such a strong desire to be here making things with other people, to feel human. I conceived this project prior to COVID and I never would’ve imagined this would be the environment I’d be recording, but this time has made me think about just how precious institutions like Greenwich House are. People need communities like this during these difficult moments, and I hope the film emphasizes that and helps us not take it for granted.

What are your plans for the completed film once it’s ready?

The plan is to screen it at the Pottery next summer during the resident artist show. The goal is to make something for the Pottery that reflects its community, so that’s really the ultimate audience for it. I think it will be really interesting to look back on ten, twenty years from now, so I hope it lives on in the archives at GHP and becomes an important record of this moment. This is the most large scale video project that I’ve done, and I’m really grateful for the opportunity to do this here. I’m grateful to be a part of Greenwich House and to have the chance to make this movie.