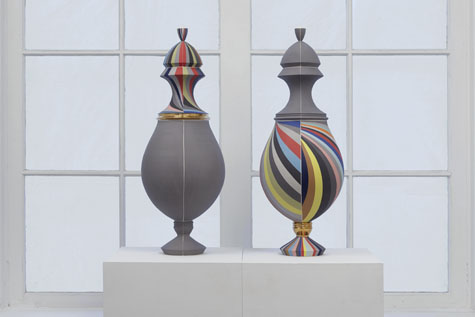 The Jane Hartsook Gallery is pleased to present the work of Adam Field, Samuel Johnson and Peter Pincus in a dynamic reassessment of surface. Using the pottery form as a catalyst for infinite variation, these artists endeavor to reconcile their unique approach to mark-making with a conceptual interest in relationship to form. Field, Johnson and Pincus set about to reevaluate the connection between form, surface and content.

Adam Field earned his BA in Art from Fort Lewis College. For two years he immersed himself in the San Francisco bay area, where he began his full time studio practice. He relocated to Maui, where he established a thriving studio business. He spent most of 2008 in Icheon, South Korea, studying traditional Korean pottery under 6th generation Onggi master Kim Il Mahn. In 2013 he created HIDE-N-SEEKAH at the NCECA conference in Houston, TX. After maintaining his studio in Durango, CO for 5 years, Adam recently moved to Helena, MT where he is a long-term artist in residence at The Archie Bray Foundation.

Samuel Johnson is an Associate Professor of Art at the College of Saint Benedict and Saint John’s University. Samuel has participated in sixty-eight exhibitions, including seven solo exhibitions. His work is in the permanent collection of the North Dakota Museum of Art and featured in the book, Stoked: Five Artists of Fire and Clay. Samuel grew up on the western prairie of the Red River Valley, outside of Breckenridge, Minnesota. Before earning his MA and MFA from the University of Iowa in 2005, he apprenticed with Richard Bresnahan, studied ceramic design at The Royal Danish Academy of Fine Arts – The School of Design in Copenhagen, and worked in Japan as a studio guest of Koie Ryoji. He lives in St. Joseph, Minnesota.

Peter Pincus is a practicing artist, living and making in Penfield, NY, and Visiting Professor of Ceramics at Rochester Institute of Technology. His work has been exhibited in venues such as the Museum of Contemporary Craft, John Michael Kohler Arts Center, San Angelo Museum of Fine Arts, Icheon World Ceramics Center, TRAX Gallery, the Art of the Pot studio tour and National Council on Education for the Ceramic Arts. A recipient of the NICHE award for slip cast ceramics, Peter’s work can be found in numerous private and public collections. Peter received both his BFA (in 2005) and MFA (in 2011) from Alfred University.