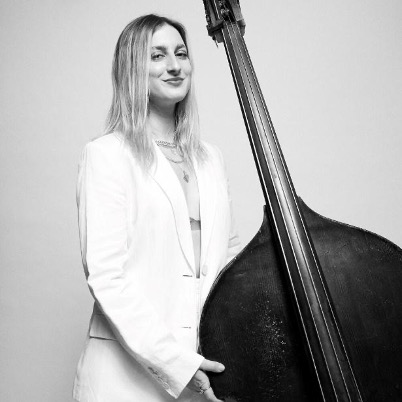 With the recent release of her sharply realized, thematically varied and gently psychedelic sophomore album, I Want to Sing My Heart Out in Praise of Life, the bassist and composer Adi Meyerson had only just announced herself as one of the brightest voices of the modern generation of jazz. Then COVID happened. “We certainly weren’t able to tour,” Meyerson says, “but I think that in coming out of it, I’ve gained a sense of direction and hopefully a better understanding of who I am as an artist. I’ve started thinking about what I can leave behind as my legacy.” The next step toward the building of that legacy starts with her newest project, Dark Matter, premiering April 7 at the Greenwich House Music School Uncharted concert and residency series.

“Dark Matter is an idea that has been brewing for quite a while,” Meyerson tells us. “I have been engaged in more complex productions for several years; now I want to strip my orchestration down and channel it through an acoustic trio. The band’s instrumentation will be bass, drums and alto saxophone, with the occasional addition of a spoken word collaborator.”

“The music is composed as a kind of space and time travelogue, creating tension and exhalation in silence and cacophony. As a continuation of Sing My Heart Out, the intention with Dark Matter is to offer the listener a place for calm reflection on our immediate moment through the synthesis of lyricism and more abstract sound. Stylistically, I’m exploring the boundaries of free jazz, while still making room for structured vocals.”

As the improvisatory nature of Meyerson’s new work will require considerable tinkering, she is particularly happy to be supported by Uncharted’s residency program, which offers paid rehearsal time, free rehearsal space and extensive technical and professional support.  Meyerson says, “I expect this project will continue well beyond this show but, without a proper launchpad, it’s hard to imagine how we would begin. Having a welcoming facility is incredibly important in the process of creating a work that, by design, has to spring out of experimentation. I’m grateful to Greenwich House for providing that support. They’re a great community and I’m honored to be a part of it.”

Adi Meyerson is an Israeli-raised and NYC—based bassist, composer, arranger, and educator. Meyerson moved to New York City to study music in 2012. Since then, she has played in such highly renowned local venues as Mezzrow, Smalls, The Jazz Standard, Smoke, and more alongside artists including Joel Frahm, Joe Magnarelli, Steve Nelson, Charli Persip, SEENA, Verite, The Side Project, Fielded, MUMU, Melissa McMillan, Camile Trust, Doe Paoro, Kimbra, and many more. Meyerson is a member of the pop chamber orchestra Little Kruta and has recorded and performed with them on The Tonight Show Starring Jimmy Fallon, as part of The Hum Series at National Sawdust, and at many other venues around NYC. In September 2017, her band recorded their debut record, Where We Stand, containing nine of her original compositions. Meyerson’s music was referred to as “Intuitive and perspicacious… display(ing) a musical maturity that belies her newcomer status,” by Downbeat Magazine.