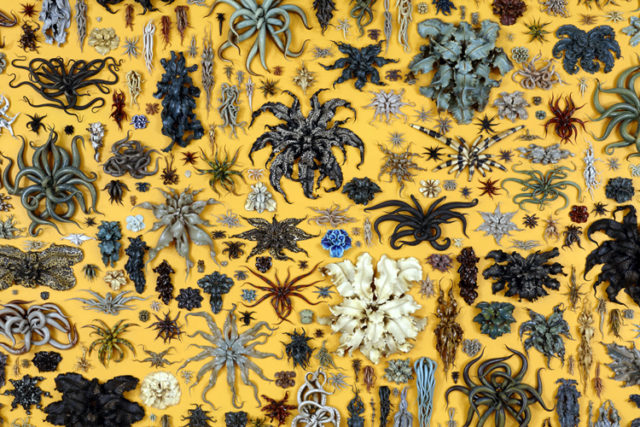 The Jane Hartsook Gallery is pleased to present the work of Massachusetts-based artist Christopher Adams. This work represents the culmination of his 10-month residency at Greenwich House Pottery. Christopher is a prolific artist whose work focuses on flora and fauna exhibiting a mastery and affinity of material and glazed surface.

“My ceramics work relates intimately to my interests and experiences outside of art. Much of my formal background to date has been in the sciences, with a special emphasis on natural history. Most of my ceramic works fall into the category of “organic abstraction.” The pieces are influenced by, and may suggest, a variety of creatures, but none of them represent any specific organism. Instead, the works usually play on biological concepts – speciation, convergence, mimicry – to generate aesthetic novelty.” – Christopher Adams

Christopher Adams received his Doctorate of Medicine from Columbia University College of Physicians and Surgeons in 2004 and a Bachelor of Arts in Biology in 1994 from Harvard University. Christopher is an Artist-in-Resident at the Ceramics Program of the Office of the Arts at Harvard (2009-present and in 2004) and was a member at Greenwich House Pottery and the Westside YMCA from 2004-2005. Christopher exhibited in the 2012 and 2008 “Taiwan Ceramics Biennale”, at “Pulse New York” (Hosfelt Gallery), SCOPE Miami, Hamptons and New York in 2006, the “19th San Angelo National Ceramic Competition”, “Flora and Fauna” at the Museum of Arts and Design in 2011 and the 2011 “NCECA Biennial” in Tampa Florida.