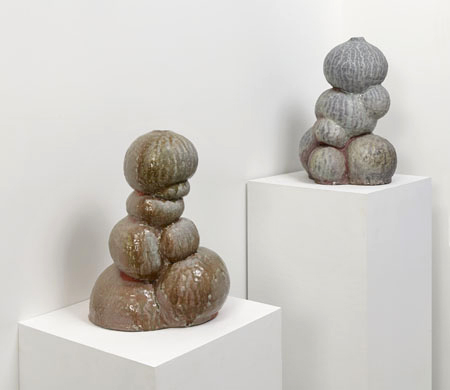 The Jane Hartsook Gallery is pleased to present Kansas-based artist, Ted Adler, in his New York City solo exhibition debut. Adler makes biomorphic abstractions using the vessel as a metaphor for the figure. These current wood fired vessels are his latest in his documenting the effects of process and time, simulating an experience of existence, which Adler references with his title, Concrescence, a term of Alfred Whitehead’s denoting the formation of an entity, giving form to formlessness.

“Clay is interesting…as both a material and a metaphor. When making, I look to engage a sense of “madeness” through the plasticity of the material and the sensuous, fluid volumes of the vessel. The rich, varied surfaces of wood-firing convey the change and flux of the kiln environment. These processes tend to capture the sense of clay’s protean malleability that enhances the way that the objects might be interpreted as a metaphor for the fugitive nature of experience. By using the vessel as an analogy for selfhood and subjecting it to processes of forming and firing that lend themselves to a sense of transformation (which is both actual and figural), I hope to elicit a sense that our relationship to ourselves and the world around us is more slippery than we ordinarily like to admit.” –Ted Adler

Ted Adler is Associate Professor of Art and Area Head of Ceramics Media at Wichita State University. He received his BA from Lewis and Clark College in Portland, OR in 1993 and his MFA from Ohio University in Athens, OH in 2002. Adler also studied with renowned artist Toshiko Takaezu, with whom he apprenticed for more than a year in her Quakertown, NJ studio. Adler has exhibited work in more than 75 exhibitions in addition to lecturing and demonstrating at numerous ceramic centers and universities across the nation, including the Archie Bray Foundation, Arrowmont School of Crafts, and the Anderson Ranch Art Center.