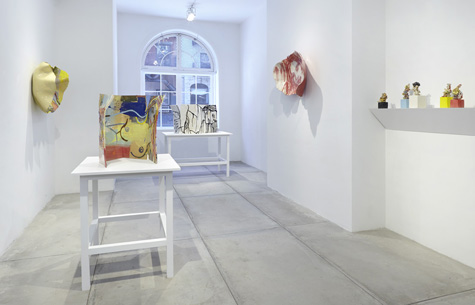 Déesse Terre
Ghada Amer
Exhibition on view April 6 through May 17, 2017

“There is no precedent for Ghada’s ceramics beyond her own body of work. Since the 1970’s, Figurative art has experienced a renascence in the ceramics’ sphere. Ghada’s large wall hangings are undulating curvilinear forms with raised rounded edges framing the image. These ‘ceramic paintings’ contain portraits of women made bright with color and fierce through their rugged organic forms. These pieces grew in size and formal complexity, one might say, anticipating her sculptures. The sculptural work, zigzagging freestanding slabs she developed are far more conscious of their arrangement. They reference her paintings torn from their stretchers, folded and crumpled. These brilliant and imposing slabs are viewable in the round necessitating larger figures and subsequently more developed narratives.”

Ghada Amer is an American artist, born in Egypt, living and working in New York City. Amer received her MFA in the arts at Villa Arson in Nice, France. She has been featured in many major exhibitions worldwide with solo exhibitions at the Brooklyn Museum of Art; Musee d’Art Contemporain de Montreal; and the Museo d’Arte Contemporanea Roma, Rome among others. She was included in major group exhibitions at Gwangju Museum of Art, South Korea; and the Museum of Modern Art New York, and PS1. Amer has also exhibited in the Venice Biennale, the Sydney Biennale and the Whitney Biennale. Amer’s works are part of major public collections such as Centre Pompidou, Paris; Art Institute of Chicago; Detroit Institute of Art; Mathaf, Doha; Samsung Museum, South Korea; and Guggenheim Abu Dhabi.

Ghada Amer is represented by Cheim & Read in America, Kukje in South Korea and Goodman Gallery in South Africa. 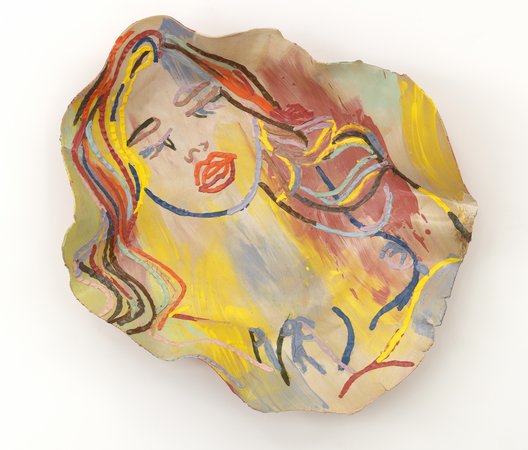 November 21, 2016 – March 17, 2017 | Egyptian painter and sculptor, Ghada Amer, is our next artist in residence. Amer is a one-time Pollock-Krasner grant recipient who established the parameters of her residency in preparation for her upcoming solo