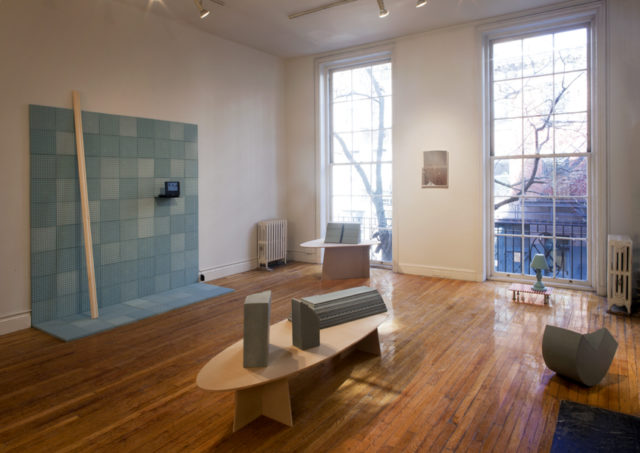 The Jane Hartsook Gallery is pleased to present Forehandedness—new sculpture by Baltimore-based artist David S. East. For his first solo exhibition with this gallery, East has created monuments of dailiness, sculptures that combine ubiquitous ornamentation and serene pastels—at times uniting technology and woven fabric—offering a genealogy of cultural homogenization. East’s work is thoughtful however much the installation effortlessly transposes formalism and irony.

“Through architectural and design references my work has revolved around issues of urban planning,architectural ornament and design as signifiers of our cultural history. My work attempts to reveal the positive and negative by-products of our attempts to establish order. As Ebenezer Howard’s idealism gives way to white flight and Constance Spry is remade into Martha Stuart as a multi-national; my work attempts to trace these cycles, combining the nostalgia of gingham with the high modernism of an Eames profile. The sources and images I have sought out: cheap Styrofoam knock-offs of classic decorative trim, the rosette, the mantle; become a mirror of the phenomena and peculiarities of an “American” point of view. The approach I have taken attempts to reflect on the monumental within the mundane, and seeks to bore out the middle of modernism to see its split-level by-products. The work rotates around these axes operating as much a strategy of thinking as of making.”—David S. East

David S. East is Chair of Ceramics at the Maryland Institute College of Art. East has taught as a visiting artist at the University of Missouri-Columbia (2001-2007), Alfred University, Kansas City Art Institute, Massachusetts College of Art, Illinois State University, Illinois Wesleyan University, Washington University, Ohio University and Tainan National College of Art, Tainan, Taiwan. East’s work has been exhibited nationally and internationally in juried and curated exhibitions, most recently at the GICBiennale 2011, Icheon, Korea. He has received numerous awards including an Individual Artist Award from the Maryland State Arts Council, the Lighton Foundation and the McKnight Foundation. He was in residence at the European Ceramic Work Centre in 2007 and was recently the Visiting Artist in Residence at Tyler School of Art in Philadelphia, PA. East received his BFA in Ceramics from the University of Wisconsin – River Falls (1997) and his MFA from Southern Illinois University Edwardsville (2000).