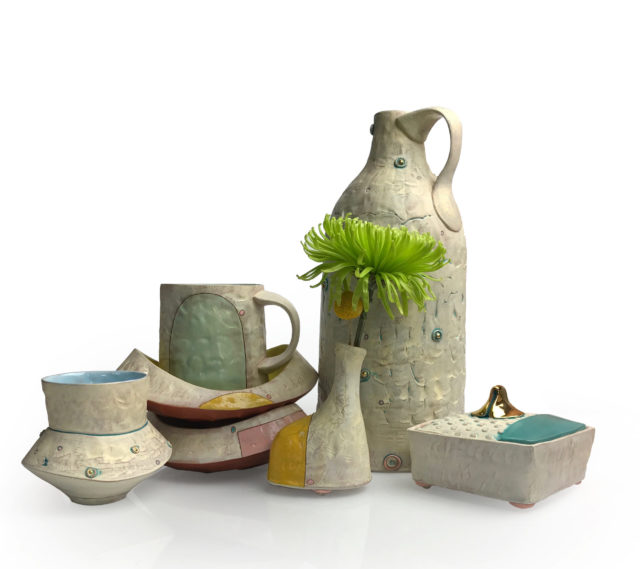 The Jane Hartsook Gallery is pleased to present Didem Mert’s first solo exhibition in New York City. In this new body of work, Mert emphasizes the “fun” of ceramics by playing with basic pottery skills to reimagine vessel forms in ways that express her personality. The distinctive surfaces Mert achieves are heavily influenced by her early exposure to woodworking. As the daughter of a woodworker, Mert grew up paying special attention to surface texture and finish, a focus that carries through in her careful mark-making and selection of terra sigillata and glazes. Even the bright pops of color in her work mirror the woodshop, echoing the bright warning colors of heavy equipment, though rather than danger these tones warn of impending FUN!

Didem Mert is a San Francisco-based artist where she is also the Education Director of Clay by the Bay. Mert was born and raised in Cincinnati, OH. She earned her MFA from Edinboro University of Pennsylvania and her BFA from Northern Kentucky University. Mert has shown her work nationally, including at: The Kiln Studio (Fairhope, AL; 2019), Clay AKAR (Iowa City, IA; 2018), The Clay Studio (Philadelphia, PA; 2017), Companion Gallery (Humboldt, TN; 2016), and Erie Art Museum (Erie, PA; 2015), among others.