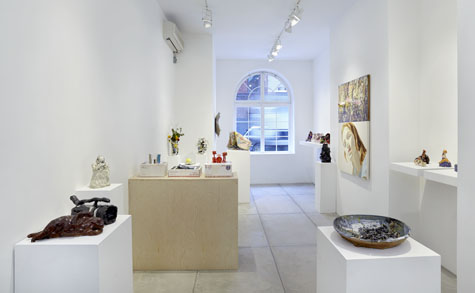 The Jane Hartsook Gallery is pleased to present an exhibition bringing together for the first time the ceramics of New York City artists Ghada Amer, Trisha Baga, Robin Cameron, Joanne Greenbaum, Pam Lins, Alice Mackler and David Salle, into one exhibition. These artists highlight the artworld having found expression in clay – encapsulating the mood of the contemporary scene. All of these artists work out of the studios at Greenwich House Pottery, through class, a clandestine ceramics club or our residency program. Though the Pottery might be the thread binding these artists together there is a commonality in their expressive approach to material manipulation and a profound intrigue for color.

Figuration, abstraction, neo-expressionism and the postmodern are all represented in this exhibition. Each artist approaches the material with similar motivation, to exploit clay’s potential – bending the material to their will. Salle explores and his work documents the physicality of the material, pushing, pulling, pinching and tearing at the forms while Mackler uses the material as an expression of her inner impulse. The pure abstractions of Greenbaum are in-between, neither representative but not completely without grounding. Baga and Lins recreate actual objects, or in Baga’s case, persons. Their approach to the material expresses a real joy in exploration and creation. Cameron, whose work vacillates between the figure and the vessel, recycles the old to breathe life into the new. Amer’s works are representations of the figure in her case, the woman. Amer works within the tradition of functional forms made with vivid porcelain coloration. Regardless of the artist, color is a central theme among their works, that and an unbounded enthusiasm for material potential.

The groundswell of interest in ceramics now taking place is unprecedented and New York City is the epicenter. In addition to the numerous gallery and museum exhibitions around the city, our studios are filled with artists looking to expand their practice. These artists are exploiting clay’s expressive potential and have found a welcoming home in our studios. Whether making work for an upcoming solo exhibition in their respective gallery, or developing ideas for the Whitney Biennial, their activity has added to the culture, community and undoubtedly to the discourse of the field. At present this work is largely neoexpressionist and at odds with conceptual art, though not to imply that it is without meaning. It is raw, unmediated, irreverent and reverential. This art turns away from conceptualism to look inward, with the focus on itself and the medium.

(b. 1963, Cairo, Egypt) and emigrated at age 11 to France where she began her artistic training at Villa Arson in Nice. She lives and works in New York City, where she is represented by Cheim & Read Gallery and has had her work presented in numerous solo and group local exhibitions at Cheim & Read, Deitch Projects, the Whitney Biennial and the Brooklyn Museum of Art among several others. Internationally, she has shown her work widely, including at Biennales in Venice and Sydney.

(b. 1985, Venice, Florida) is an artist living and working in New York. She has had solo exhibitions at Vilma Gold Gallery in London, and the Kunstverein Munich, and has shown her work at Greene Naftali Gallery, EAI, PS1, Johann Koenig Gallery, Performa09, The Housatonic Museum, LAXART, and El Centro Cultural Montehermoso.

(b.1981, British Columbia, Canada) is an artist based in New York, who is known for her books, prints and zines. In addition to a solo exhibition at Art Metropole in Toronto, her publications are available at Printed Matter and have been shown at the New Museum’s Resource Center. A comprehensive selection of her publications is held in the Library of the Museum of Modern Art.

(b.1953 New York City) lives and works in NYC and Berlin. Her work has been included in many solo and group exhibitions in the United States and abroad. She has been reviewed in The New York Times, Art in America, Artforum, and Hyperallergic. Her awards include the Gwendolyn Knight Lawrence Award from the Academy of Arts and Letters in 2014, the Joan Mitchell Foundation Fellowship, the Guggenheim Fellowship, the Pollock Krasner Grant, and the NYFA Fellowship in Painting. She is represented by Rachel Uffner Gallery in New York, greengrassi in London, Shane Campbell Gallery in Chicago, IL, Nicolas Krupp Contemporary Art in Switzerland, Galerie Crone in Berlin, Germany, and Van Horn in Dusseldorf, Germany.

(b. Chicago, Illinois) lives and works in Brooklyn, NY. Lins teaches at the Copper Union School of Art, Princeton University, and is on the faculty of Bard’s MFA program. Lins is represented by Rachel Uffner Gallery, NY. Lins has shown in the Whitney Biennial at the Whitney Museum of Art, the Tang Museum of Art and CCS Bard Hessel Museum of Art. Lins has received numerous awards including a Radcliffe Fellow at the Institute for Advanced Studies Harvard (2013), The Guggenheim Foundation (2008), the Howard Foundation Award in Visual Arts from Brown University (2007), and the Pollack/Krasner Foundation (1998). Lins has been reviewed in the New York Times, Art in America, Bomb Magazine, the New Yorker, and ArtForum.

(b. 1931, New York City) Mackler’s work was singled-out in reviews by Roberta Smith in the New York Times and Andrew Russeth in the New York Observer. Alice Mackler was also included in an article titled, “6 Artists Who Made It Big After Turning 70” by Julia Halperin in Blouin Art Info March 23, 2013. In 2013, she had her first solo exhibition at Kerry Schuss. She studied at the Arts Students League and received a BFA from the School of Visual Arts in New York.

(b. 1952, Norman, Oklahoma) lives and works in Brooklyn. In 1970, he began his studies at the newly founded California Institute of the Arts in Valencia, where he worked with John Baldessari. After earning a BFA in 1973 and an MFA in 1975, both from CalArts, Salle moved to New York. Solo shows of Salle’s art have been organized by the Museum am Ostwall Dortmund (1986–87), Institute of Contemporary Art at the University of Pennsylvania in Philadelphia (1986–88), Stedelijk Museum in Amsterdam (1999), and Waddington Galleries in London (2003), among others. He has participated in major international expositions including Documenta 7 (1982), Venice Biennale (1982 and 1993), Whitney Biennial (1983, 1985, and 1991), Paris Biennale (1985), and Carnegie International (1985).