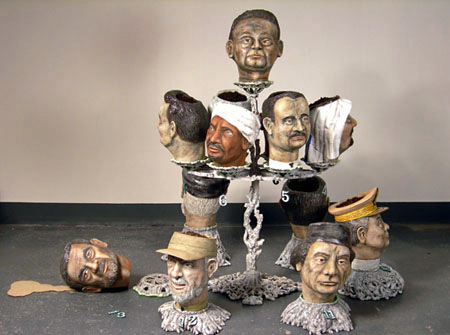 Matt Nolen writes: “The Grotesque Garden is a narrative environment comprised of three-dimensional works of art that evoke the mystery and aura of contemplation found in a secret garden. The individual works draw inspiration from garden seating, fountains, grottoes, topiary and especially the statuary found in Italian… Mannerist Gardens such as the “Monster Garden” of Bomarzo. Using the available allegories and metaphors found in natural cycles, landscapes and gardens, I hope to create a twisted world expressive of the joys and challenges of life in the 21st century.”

“I have been exploring the metaphors of “landscape” and more particularly the notions of the private (internal landscape of self) and public (political and social world) garden through figurative ceramic sculpture for a few years now. This line of work began with a narrative public men’s restroom that I made by hand for the John Michael Kohler Arts Center. The public restroom is a psychologically charged environment where one must perform highly private rituals in a shared space. I discovered then the potential for narrative ceramics away from the tabletop and into the public realm.”- Matt Nolen

Matt Nolen is a studio artist living and working in New York City. Trained as a painter and architect, Nolen’s work includes sculptural objects and architectural installations using clay and mixed media. His work has been exhibited internationally and is in numerous private and public collections including: The Cooper-Hewitt Museum, NYC., The Museum of Arts and Design, NYC., The Newark Museum, NJ., The Houston Museum of Fine Art, TX., the De Young Museum, San Francisco, CA. and The Everson Museum of Art, Syracuse, NY. Nolen’s work has been written about and reviewed in many periodicals and books including: The New York Times, American Ceramics, Ceramics Art and Perception, Confrontational Clay, Postmodern Ceramics and Painted Clay. Nolen has been awarded a New York Foundation for the Arts Fellowship, Mid Atlantic Foundation (regional NEA) Fellowship and international residencies in Israel and China. His residency at the Kohler Co.’s Art/Industry Program resulted in a handmade public washroom that has been named “Best Restroom in America” by the Cintas Corp. and among “The 10 Best Bathrooms in the World” by the Travel Channel. He is currently serving as President of the Board of Trustees for Watershed Center for the Ceramic Arts in Newcastle Maine and is Adjunct Professor of Art at New York University and Pratt Institute.