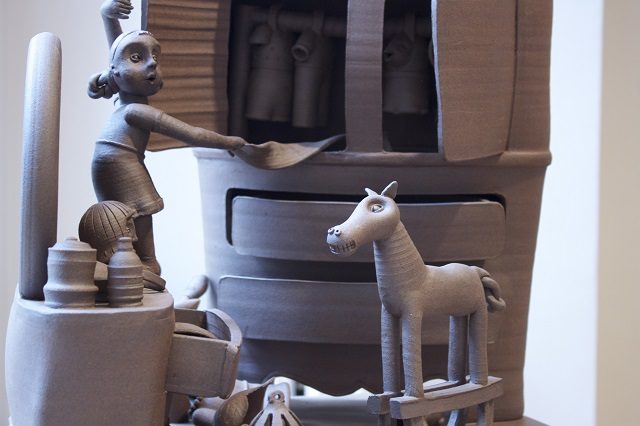 The Jane Hartsook Gallery at Greenwich House Pottery is pleased to present an installation by German-born artist Gerit Grimm. For her New York City Solo debut Grimm has created an expansive autobiographical narrative of miraculous tales.

“The first time I smelled clay I got addicted to it. I was twelve years old. Having been a production potter for four years, my favorite tool is the wheel, and I build all of my figurative scenes using it. I start them by making a quick sketch and by throwing the component parts for each piece… I draw on a wide range of sources—especially historical work such as Staffordshire and Meissen porcelain…Using tales and myths as subject matters I often ornately decorate my work in order to create something fairytale like which could have been collected by aristocracy or shown in an art deco coffee bar. In this body of work, the stone-like appearance of some of the pieces reinforces the sculptural quality of my work. Each piece forms one stage in a series of autobiographical recollections appearing as a moment frozen in stone and in time.”—Gerit Grimm

Gerit Grimm was born in Halle, German Democratic Republic. In 1995, she finished an apprenticeship, learning the traditional German trade as a potter at the “Altbuergeler blau-weiss GmbH” in Buergel, Germany and worked as a Journeyman for Joachim Jung in Glashagen, Germany. She earned an Art & Design Diploma in 2001, studying ceramics at Burg Giebichenstein, Halle, Germany. In 2002, she was awarded the German DAAD Government Grant for the University of Michigan School of Art and Design, graduating with an MA in 2002. Grimm received an MFA from the New York State College of Ceramics at Alfred University in 2004. Grimm is a widely traveled artist, and her work has been exhibited in America, Germany, Japan, and China. Grimm has been a resident at the Mc Coll Center, Bemis Center, Kohler Arts & Industry Program, and the Archie Bray Foundation. In 2009, NET Television created “Fantasia in Clay” a Nebraska Story about featuring Grimm working on one of her creations.