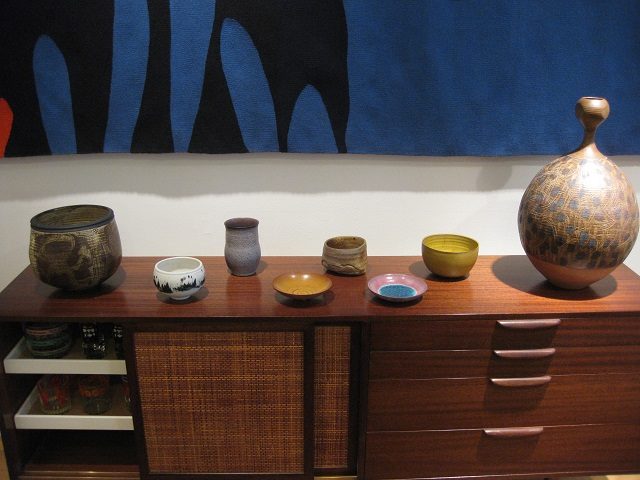 In the 1950s and early 1960s, trends in home furnishings in the United States reflected a complex national mood high hopes and deep anxiety. At once optimistic about economic and technological progress, Americans were also chastened by the pervasive anxiety of the Cold War and the prospect of military conflict with the Soviet Union. It was not unlike the earlier part of this decade: an unprecedented economic boom coupled with unprecedented fear of terrorism. One way in which these impulses were manifested was in the trend for combining the sleek design of manufactured goods with more rustic, pastoral handmade craft objects.

It was during this period in GHP’s own history that Rose Slivka, then editor of Craft Horizons Magazine (now American Craft Magazine) introduced director Jane Hartsook to the Montana-born potter Peter Voulkos who would teach numerous workshops here in the early 1960s. From that point on, both in Greenwich House’s studios and in others across the US, American studio pottery would begin to encompass sculptural and expressive impulses like never before. GHP’s location in the heart of Greenwich Village, a mecca for creativity and visual expression of all kinds, made it fertile ground for experimentation and risk-taking in ceramics.

According to Sarah Archer, curator, “[t]his period in American history was a pivot point in design where tastemakers, designers and consumers were both looking back and looking forward–seeking comfort in nostalgia, and longing for something new. The design world reveled in an attraction to new technology and streamlining, while the crafts signaled a longing for something more rustic and uncomplicated, perhaps a hipper kind of Americana and coziness than the more mainstream Colonial Revival style of hooked rugs and windsor chairs that predominated at the time.”