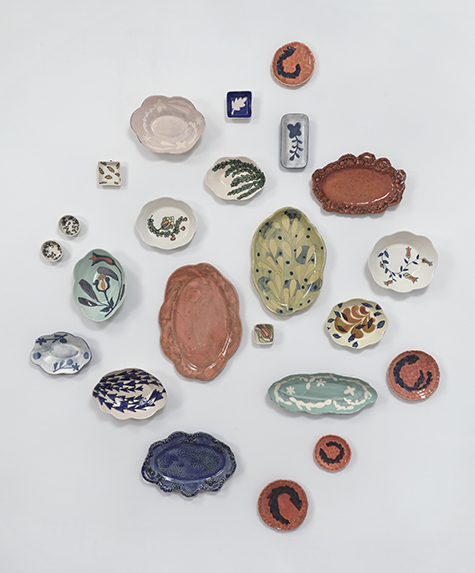 The Jane Hartsook Gallery is pleased to present the two-person Exhibition of Naomi Cleary & Perry Haas. This exhibition highlights the eclecticism prevalent within the field of contemporary ceramics.

Cleary uses the industrial process of mold making and casting to create replicas of existing objects. Repeating form time and again. Cleary’s expression comes through her drawing and layering of the surfaces, creating colorful abstract patterns and recognizable imagery. Her drawings unfold on the interior and exterior of the porcelain forms.

Haas creates one-off forms on the potter’s wheel. Each piece documents the subtleties of its making. Furthering this Haas uses wood firing that leaves the flame, ash and time to develop the ceramic surface. While Haas has shown himself to be knowledgeable of the firing process, there is still a fair amount of chance as to how each piece will evolve in the kiln. Their separate approach to pottery comes from seemingly irreconcilable positions, but oddly the pairing opens a space to consider their similarities.

Naomi received a BFA from The University of the Arts, Philadelphia PA in 2002 and an MFA in 2007 from The Ohio State University, Columbus OH, returning to Philadelphia in early 2008. Currently, she is the Associate Director of Retail and Marketing at the Clay Studio in Philadelphia.

Perry has held residences in Missoula, Montana and in Guldagergaar, Denmark. He has been awarded the Young Wood Fire Artist Award of 2014 at the European Wood Fire Conference. Currently Perry is a resident at The Archie Bray Foundation, in Helena Montana.