On a Grecian Urn, Adam Shiverdecker 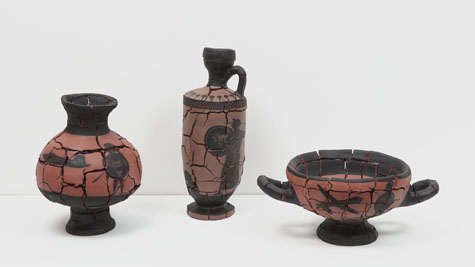 On a Grecian Urn
Adam Shiverdecker
Exhibition on view July 10 through August 2, 2014

The Jane Hartsook Gallery is pleased to present the New York City solo exhibition debut of Manhattan-based artist, Adam Shiverdecker. An artist with a unique approach to material, Shiverdecker takes advantage of the “shortcomings” of the clay’s materiality. Wrapping it around high temperature wire and the subsequent heating it to temperatures beyond inhabitable to sustain life, causes the ceramic to wither and crack along the armature. The result is a look of artifact and antiquity which makes the work all the more tragic and haunting.

Adam’s work “imagines what would happen if the entire military arsenal were simply pushed into the ocean. I’m a committed pacifist, but I am also drawn to the sleekness, the power, and the materiality of machines of war. My work attempts to represent my ambivalence to icons of military might by taking the forms of fighter jets, submarines, and missiles and denaturing their surfaces. By reforming weapons out of wire, I reference both the practice of children’s war games and modeling…I then coat these structures in…clay, allowing for an arbitrary amount of decay. It is this fantasy of decay…which my work tries to trigger. I also apply this logic to historical forms, specifically Greek ceramic vessels. I’m interested in these Greek vessels because of the way they represent a culture that venerates war and conflict, as this seems to anticipate elements of our own bellicose culture.”—Adam Shiverdecker

Adam Shiverdecker is the Studio & Fabrications Manager of Greenwich House Pottery. Prior to accepting this position he was the Assistant Professor of 3D Interdisciplinary Art/Ceramics at The University of Toledo. Before assuming his role at Toledo, he was the Artist-In-Residence in the ceramics program and adjunct faculty at Tyler School of Art and a two-time summer resident artist at The Archie Bray Foundation in Helena, Montana (2009, 2011). Adam was named an emerging artist by Ceramics Monthly and was the Myhre Scholar at The Archie Bray Foundation. Before pursuing his MFA at the University of South Carolina (2008), Adam graduated from the University of Toledo with a Bachelor of Education in Visual Arts (2005).