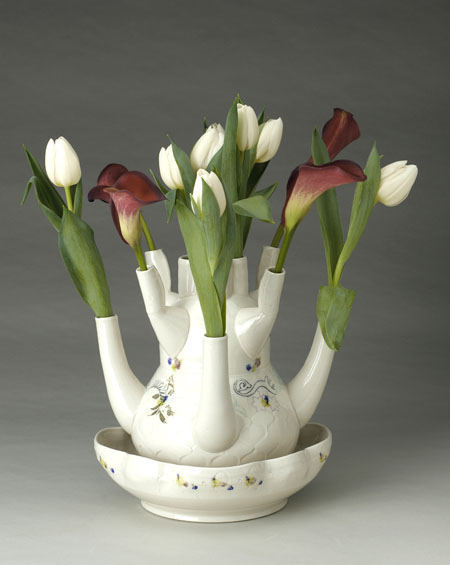 “The tulip is a wildflower said to originate in western and central Asia, mainly Armenia and Persia. The origin of the word tulip is unknown. One explanation for the name tulip is its resemblance to the headgear worn by Persians – the turban. The turban was also written as “toliban” which is translated into Latin as “tulipa”.
The Austrian ambassador to the Ottoman court is said to have stolen tulip seeds and bulbs and carried them back to Europe in the middle of the 16th century. In 1562, tulip bulbs reached Holland and became a rarity that only the wealthy could afford. By the 1620’s tulip cultivation and trading had become popular with merchants as well as the Dutch aristocracy who coveted exotic mutations. By 1623 tulips were sold for the prices of good houses. In 1637, the tulip market crashed and left Holland in financial ruin.
These events coincided with the beginnings of the Dutch East Indies Trading Company and the import of Chinese porcelain to Europe. Northern European pottery, influenced by Italian maiolica brought to Europe by the Moors from the Middle East, began to emulate the Chinese porcelain being unloaded from the ships arriving from Asia. The rise of what we now call tulip madness may have contributed to the creation of the idiosyncratic Dutch flower vase with spouts, the tulip vase.

The confluence of history, memory and perception that merge to form our individual and collective worldviews are at the core of my curiosity and desire to make things. The objects I make are specific in their material and function, and yet I strive to layer my forms with rewritten stories and interpretations through subtle complexity and nuance. The tiles are ubiquitous and recognizable forms, while the vases with multiple spouts are plucked out of a moment in history that is long past and unrecognizable in our modern culture. Geometric patterns and ornamental arabesque from Iran and the Middle East are collaged and layered on the tiles, the pottery forms, and the walls in an attempt to integrate the objects with the architectural space of the gallery and draw attention to parts of their history that have been forgotten or erased. Rewriting stories into objects like a pot is a contemporary journey. I am not going back into history; I am drawing history back into the present.”