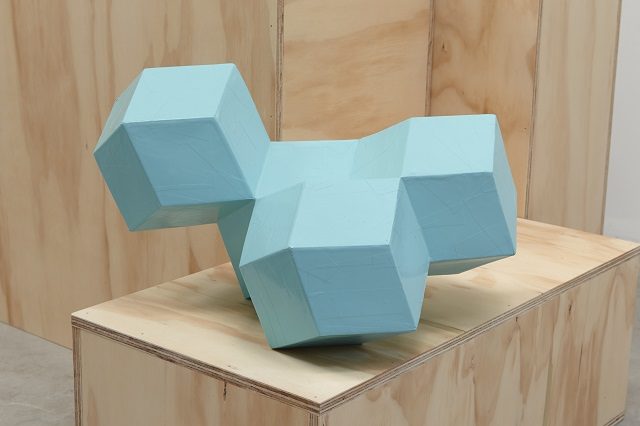 The Jane Hartsook Gallery is pleased to present the New York City solo exhibition debut of Paul Sacaridiz. Sacaridiz is at a place in his practice where his skills and intellect collide. Taken on their own Sacaridiz’s objects bear no resemblance or connection, but placing disparate components into close proximity his art intimates a cohesive narrative. Individually these are hermetic sculptures whose power grows in relationship to the other works, making their interest grow where otherwise only formal concern might reside.

“The problem with objects is that they can be so specific…I am interested in the collision of abstraction, urban planning and utopian systems; and the seemingly impossible task of understanding something in its entirety. My work carefully situates objects within systems that seem to imply an internal logic, but at the same time appear illusive and open-ended. Structures carefully frame out objects that appear random and chaotic alongside precise mathematical models and awkward structural forms… highly constructed, layered and insistent on being understood for what it is, rather than as placeholder for metaphor or illusion.”
—Paul Sacaridiz

Paul Sacaridiz (b.1970) lives and works in Deer Isle, Maine where is Executive Director of the Haystack Mountain School of Crafts. As an artist his work encompasses the making of sculpture and leadership within academic and not for profit arenas. His work has been included in exhibitions at the Charles Allis Art Museum, the Philadelphia Museum of Art, the Denver Art Museum and the Houston Center for Contemporary Craft among others. He has been the recipient of numerous artist residencies including the Ragdale Foundation, Vermont Studio Center, Watershed Center for the Ceramic Arts and the Arts/Industry Program at Kohler Company. He is a member of the International Academy of Ceramics and has served on the board of the National Council on Education for the Ceramic Arts (NCECA). Prior to leading Haystack he was Professor and Chair in the Department of Art at the University of Wisconsin-Madison.