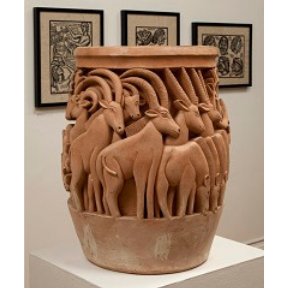 The Jane Hartsook Gallery at Greenwich House Pottery is pleased to present the work of artist Peter Gourfain. In his second solo exhibition at the Jane Hartsook Gallery, Gourfain shows work that spans his life as an artist and exemplifies his interdisciplinary approach to art making—with prints, drawings, carvings, bronze and ceramics.

“For all his commitment to social justice, what Gourfain does in the face of times like these is what all artists do: make art. Unlike most contemporary production, Gourfain has never been restricted to the galleries and museums. And unlike most art not restricted to museums and galleries, his is in fact “museum-quality” art, wherever it is found. His production includes not only the paintings, sculptures, pots, and prints shown in “high” art contexts, but striking banners, leaflets, buttons, and graphics that have also been seen in the streets, the meetings, the publications, the demonstrations.” – Lucy R. Lippard

Peter Gourfain was born in 1934 and received his BFA from the Art Institute of Chicago in 1956. He currently lives and in Brooklyn, New York and has been on the faculty of Greenwich House Pottery since 1995. Gourfain has had solo exhibitions at the Projects Gallery in Philadelphia, Pennsylvania, the Elvehjem Museum in Madison, Wisconsin, the Patricia Hamilton Gallery in New York City and at the Brooklyn Museum, in Brooklyn, New York. His work has been included in the Whitney Biennial at the Whitney Museum, the Corcoran Biennale at the Corcoran in Washington, DC., the Museum of Modern Art and most recently at the National Academy of Fine Arts in New York City. Gourfain received the New York Foundation for the Arts fellowship, a Guggenheim Fellowship and a New York State Council for the Arts Grant. He has been a visiting artist at the University of California Davis, Penland School of Crafts, Rhode Island School of Design and Skowhegan among others.