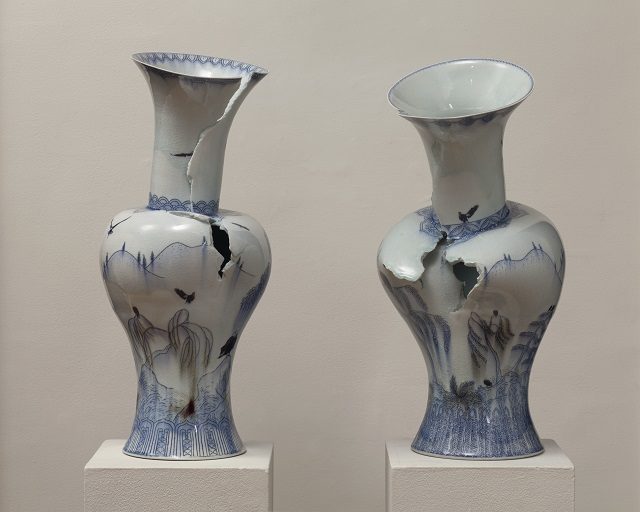 The Jane Hartsook Gallery is pleased to present Montana-based artist Steven Young Lee in New York City Solo Exhibition debut. Lee explores identity through the appropriation of historical style. Though his approach is characteristically postmodern and he addresses identity through the substance of existence via cultural constructions, his approach is refreshingly not ironical.

“My work investigates how individual realities are formed. I am fascinated in concepts and development of self that are based on identification with environment, traditions and superstitions while often straddling cultural boundaries…challenge[ing] preconceptions that can reshape our sense of identity and culture…I see these as reminders of the past, but also as objects that I have become emotionally invested in discovering my own sense of place.”—Steven Young Lee

Steven Young Lee is the Resident Artist Director of the Archie Bray Foundation in Helena, Montana. A native of Chicago, Lee received his MFA from the New York State College of Ceramics at Alfred University in 2004. In 2004-5, he lectured and taught at numerous universities throughout China. While there, he created a new body of work as part of a one-year cultural and educational exchange fellowship in Jingdezhen, Jianxi Province. A former Bray resident, Steven also spent a year teaching at the Emily Carr Institute of Art and Design in Vancouver, B.C. in 2005-2006.

In the United States, he has taught classes at Alfred University, Interlochen Center for the Arts in Michigan, the Clay Art Center in New York and the Lillstreet Studio in Chicago. His work has been exhibited in China, Canada and throughout the United States and is held in private collections in New York, Pennsylvania, Illinois and Montana.