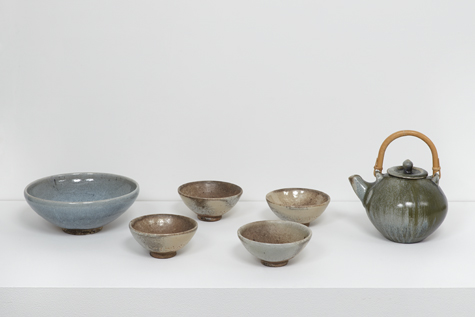 The Jane Hartsook Gallery is pleased to present the New York City solo exhibition debut of Svend Bayer. Bayer is one of the most influential potters in England, consistently making pots of enormous generosity in form and feeling. A deeply reflective potter, Bayer uses tradition as a starting point for making pottery that is deeply thoughtful and introspective. Over the last 40 years, he has refined form, glaze and fire into the extraordinary. This exhibition marks the first time a large collection of his works will be on view to a United States audience.

“I think a good pot, it has to reveal something about the maker. What you find in it is actually not so different than you would hope to find in another person. You would hope to find sort of life and a kind of response – it’s a rightness. I think it is important that you would want to touch it, to hold it. I used to think that there had to be evidence of good craftsmanship. I’m not sure about that anymore; in fact I don’t think it really matters. I think that craftsmanship is simply a tool which enables you to express yourself.”—Svend Bayer

Svend Bayer was born in 1946 in Uganda to Danish parents. He attended Exeter University, was a pupil of Michael Cardew, and worked as a thrower at Brannam’s Pottery. In the 1970’s Svend established his own pottery facility at Sheepwash in Devon with kilns based on structures he encountered during his year-long travels in Japan, South Korea, and South East Asia. The site was chosen for the proximity to the North Devon ball clay mines and sawmills. Since 2000 he has had solo exhibitions at Harlequin Gallery, Beardsmore, Rufford Ceramics Centre, North Cornwall Gallery, University of Utah, Northern Clay Center, Sturt Gallery, Gallery Lykke, Slader’s Yard, Goldmark Gallery, and the Craft Potter’s Association, London.

In conjunction with his exhibition, Svend Bayer will be conducting a one-day demonstration workshop at the Pottery, Saturday, February 20, 2016 from 10:00 a.m – 5:00 p.m.