That thing that is and isn’t, Linda Lopez 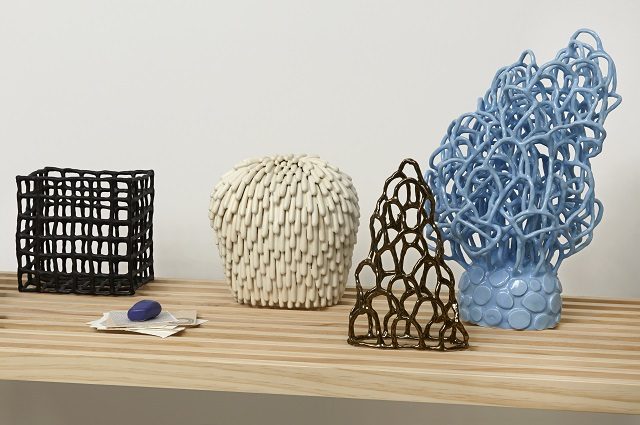 The Jane Hartsook Gallery is pleased to present Arkansas-based artist, Linda Lopez, in her New York City debut. Lopez’s seemingly arbitrary commingling of materials and forms further develops her desire to suggest the alternative existence of objects. In this work, Lopez’s sculptures animate the inanimate by combining an object with its otherness.

“There is a delightful puzzlement in the work of Linda Lopez. Familiar things—shelves, chairs, potted plants, buckets, lumps, shadows—take on an active role, pulling the viewer into a kind of alternate universe. These objects, whether sculpted or drawn, appear to have a rich interior life, a fully developed physical and psychological sense of being. I am reminded of the notion I had as a child that the toys I left behind in my bedroom every morning would spring to life as soon as I closed the door and, while I was away at school, were busy entertaining themselves in my absence. Not that the things in Lopez’s installations function as toys. Although whimsical and often radiating an aura of comfort, they appear more adult in their countenance and state of being. They seem to be maturely navigating that tenuous space between confidence and self-consciousness. They can be bright and funny or alternately moody and dark. Whatever their personality, I am drawn to them and their energy, finding solace and enjoyment in their enigmatic presence.” –Jenny Moore, New Museum Associate Curator, New York, NY.

Linda Lopez was born in Visalia, California. She received a BFA in ceramics and BA in art education from California State University of Chico (2006) and earned her MFA in ceramics from the University of Colorado at Boulder (2010). Lopez has exhibited work in New Zealand and throughout the United States including the Robischon Gallery and the Vertigo Art Space in Denver, the Nicklas Gallery in Seattle and the Clay Studio and the Center for Emerging Visual Artist in Philadelphia. In 2012, she was featured as an emerging artist in Ceramics Monthly and was a resident artist at The Clay Studio in Philadelphia, PA. In 2013, she was a resident at the Archie Bray Foundation in Helena, MT., and is currently adjunct faculty at the University of Arkansas.