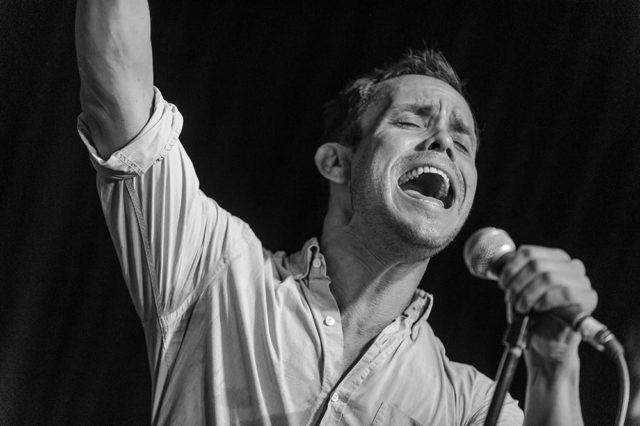 A First Look at English With an Accent

Migguel Anggelo and his longtime Musical Director and collaborator Jaime Lozano will premiere an online glimpse into the development of their ambitious new project, English with an Accent (EWaA). EWaA will ultimately take the tripartite form of a dance-theater live performance, a series of short online films and a musical album, but for this early and intimate show-and-tell, the artists will publicly premiere a fully-produced video presentation of the work, including several first drafts of the films and a number of final drafts of songs that were created during Anggelo’s recent residency as a New York Presenters Consortium artist. The performance features Joel Mateo on drums and percussion.

The story of EWaA centers around a newly emigrated caterpillar in New York City, unsure of which direction his life is taking. Is he really a caterpillar, or just a lowly worm? Will he become the butterfly of his dreams? And what does it mean to become a butterfly in the first place? This work explores the promise of the American Dream through themes of freedom, safety and self-worth. Anggelo and Lozano will provide an insightful and engaging evening of the work in progress with a look under the hood at the music, visuals and artistic ingenuity devoted to building English with an Accent thus far.

Migguel Anggelo: A First Look at English with an Accent features three first-cut videos from the artist’s forthcoming series of short films.

Migguel Anggelo is a Venezuelan-born and Brooklyn-based multidisciplinary artist. His work explores the intersections of queer, Latino and immigration identities, as well as the role of the artist in contemporary society.  Anggelo is a 2020/2021 Resident Artist of the NY Presenters Consortium and was previously a Joe’s Pub Working Group resident in 2019.  As a musician, Migguel Anggelo has released two albums (Dónde Estara Matisse and La Casa Azul); as a theater artist, has been awarded residencies to develop new works at MASS MoCA, the Kimmel Center for the Performing Arts in Philadelphia, PA and BRIC in Brooklyn, NY. He has been a feature artist in such festivals as LPAC’s Rough Draft and Provincetown’s Afterglow and has served as a cultural attaché, under the auspices of the U.S. State Department, in two separate ten-city tours of Russia.

In 2020, Migguel Anggelo released the short film Maid in America as part of National Queer Theater’s Criminal Queerness Festival. He has also personally developed and toured LatinXoxo (2018-2019), a piece which peels back onion layers of personas, “Latin lover” clichés and reckons with the tragic death of his homophobic father. Other work developed by Anggelo includes So Close: Love and Hate (2017), Another Son of Venezuela (2016-2015) and Welcome to La Misa, Baby (2016-2019).