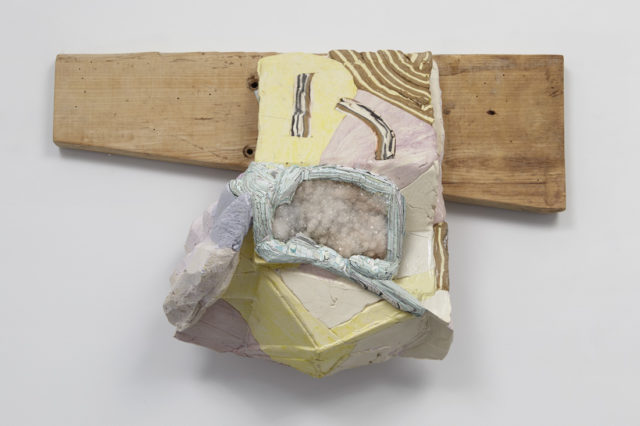 The Jane Hartsook Gallery is pleased to present Vibrant Things, a three person exhibition featuring Andrew Casto, Evan D’Orazio and Hilary Harnischfeger, curated by Aimee Odum. Undertaking the near-impossible and intricate task of absorbing the world around them, the artists transform ephemeral events from their environment into tangible and vivacious ceramic assemblages. Each creates their own distinct aesthetic using layers of clay slip, encrusted hydrostone or brightly colored ceramic mounds. Casto, D’Orazio and Harnischfeger are influenced by geological processes, banal spaces or personal moods or relationships. They channel day-to-day experiences into objects that preserve the gestures that made them, giving these static forms a sense of movement. Vibrant Things connects these lively ceramic forms with stress, humor and memory – provoking us to evaluate the forces that shape us.

Andrew Casto’s forms are loosely structured branches that seem to divide infinitely, rising and gracefully melting into their own formations. Casto builds strata with soft hues and flecks of gold that flow over mounds of fluid slip and glaze. He extracts a visual language from geological processes like erosion, linking these dynamic changes to the repercussions of stress and how it shapes us physically, mentally and emotionally. Creating a tempo with his work, Casto repeats and evolves each ceramic form, relating these transformations to our fluctuating surroundings.

Evan D’Orazio’s objects serve as actants for his interests, identity and physical and mental stress. Through a cathartic process, the work become manifestations of D’Orazio’s anxieties as he piles, throws and manipulates clay into heaps, often resembling debris. D’Orazio brings lightness to his work by incorporating colors of the 1980s and processed and artificial foods. Bright, saturated surfaces act as a counter response to his negative day-to-day experiences. The objects pulsate with a sense of liveliness and humor, pushing and pulling the viewer through D’Orazio’s responses to his daily routine.

Perceptive of the subtleties in her environment, Hilary Harnischfeger uses spaces and events to inform her raw, yet intricate forms. Mounted on the wall and in the round, the works are filled with dichotomies, acting as a truthful, yet mystical memory of her surroundings. Harnischfeger’s process involves taking molds of objects from her daily life and casting their likeness in hydrocal, further pairing them with colored porcelain, minerals and handmade paper. She finds inspiration from the architectural maquettes of German Expressionist, Hermann Finsterlin, her children’s interest in animated cartoons and a broken cliff face. Both entrancing and quiet, the objects act as passages for us to understand our own environments in a way that is fleeting, yet grounded.