Andrew Cornell Robinson is a contemporary artist who creates sculptural assemblages comprised of ceramic and mixed media alluding to myth, ritual and memory.

His formative years were informed by an apprenticeship in a studio pottery where he began his life-long study of ceramics through the lens of craft, art and design. He studied ceramic sculpture at the Glasgow School of Art and the Maryland Institute College of Art where he received a BFA. He was awarded an MFA from the School of Visual Arts, where he became interested with the intersection of memory, and identity.

His work has been featured in many publications including Maake, and Sculpture Magazines, Huffington Post, Hyperallergic, Art Info, et al. He has participated in curatorial and research projects and was a participating artist in Debtfair a project in the Whitney Biennial. Andrew has collaborated with designers including Donna Karan’s Urban Zen project where his work in ceramics led to workshops with artisans in Haiti and the creation of a ceramic studio in Port au Prince. He has worked with The Powerhouse Workshop and their design team from the Pritzker-prize winning architecture firm Herzog & de Meuron in the design and forthcoming development of a contemporary industrial fabrication center established to serve the working needs of artists in New York City. He was a resident artist at the Agastya Foundation, in Bangalore, India where he collaborated on interdisciplinary projects with science, math and art educators who created new STEAM education programs serving millions of school children across India. He is also the recipient of an Urban Glass Merit Scholarship, a Lower Manhattan Cultural Council residency and multiple grants supporting his work in craft, art and interdisciplinary design. 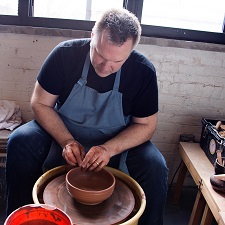