Benjamin Sutin began his career in Philadelphia where he studied with legendary jazz violinist, John Blake Jr for over six years at the Philadelphia Clef Club of Jazz. Now a graduate of the Manhattan School of Music with a bachelor’s degree in Jazz Violin Performance, Sutin resides in New York City and is a sought after performer and educator across the greater New York City area.

Music education has always been a passionate and integral part of Benjamin’s life, growing up with a family owned music school, understanding first-hand the importance of music education from an early age. He has been teaching private and group violin, viola, and piano students of all levels and ages for close to ten years now and specializes in his own unique teaching methods, individually crafted to best fit each student, while always focusing on tone production, intonation, phrasing and articulation, music theory, and fun and creative problem solving regarding technical advancement.

Every lesson, regardless of style, level, or instrument, is catered to the specific and unique needs, goals, aspirations, and personalities of each individual student, creating a challenging yet positive and encouraging learning environment for all students. Nothing is more rewarding than seeing the weekly progress, growth, and joy emanating from his students. Student success includes admission into New England Conservatory, LaGuardia High School, Special Music School, NYSSMA, High School Jazz Academy, ISO and students have been awarded Merit and Runner-Up in The National YoungArts Foundation’s annual Jazz Competition.

As a performer, Sutin has had the privilege of performing in venues such as the Apollo Theater, The Kennedy Center, Carnegie Hall, NJPAC’s Victoria Theater, Dizzy’s Club Cocoa Cola, Lincoln Center Out of Doors, Nassau Coliseum, Clifford Brown Jazz Festival and more. He’s performed with the likes of the Tran-Siberian Orchestra, Larry Harlow, Arijit Singh, David Amram, Bobby Sanabria (including on recent Grammy Nominated album, “West Side Story Reimagined”), Banda Magda, Benito Gonzalez, George Burton, and has performed for the Big Apple Circus as well as several off-Broadway musicals. As a leader, Ben has released three albums to international appeal, including his most recent “Hard Bop Hanukkah” released in November 2020 to rave reviews by the likes of Regina Carter, David Krakauer, and Downbeat Magazine.

Finally, just this year Sutin published an op-ed on the history and future of violin in jazz in the Jan/Feb 2021 issue of JAZZed Magazine. 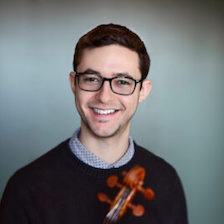