Violist Carrie Frey has performed throughout the United States and in Europe, pushing the limits of her instrument and the viola repertoire. An enthusiastic proponent of new music, she has premiered over 130 compositions and written music for herself and several of her ensembles. In New York City, Carrie performs regularly with Petros Klampanis Group, Wet Ink Large Ensemble, ensemble mise-en, Desdemona Piano Quartet and toy piano/toy viola duo Wind-Up Elephant. Her debut sonata album, The Grey Light of Day, features music of Edvard Grieg and David Wurts.

Carrie is a founding member of tricoastal string trio Chartreuse, based in New York, San Francisco and Chicago. Chartreuse has toured the U.S. Northeast and Norway, performed frequently in New York, Chicago and the West Coast, and appeared in residency at SUNY Fredonia and as part of Oberlin Conservatory’s Winter Term Chamber Music Intensive.
Carrie has appeared at orchestral and contemporary music festivals around the world, including the Lucerne Festival Academy in Switzerland; Finger Lakes Opera in Geneseo, NY; Spoleto Festival in Charleston, SC; Pacific Music Festival in Sapporo, Japan; and the Aspen Contemporary Ensemble in Aspen, CO.
A dedicated teacher, Carrie enjoys helping students learn to make music they love, as others have done for her. Her teaching focuses on comfort, fluency and flexibility, using Suzuki repertoire and techniques supplemented by popular tunes and tailored to the interests and abilities of each student. She studied at Oberlin Conservatory with Peter Slowik for her Bachelor’s, and received her Master’s of Music from Manhattan School of Music’s Contemporary Performance Program, where she studied with Nadia Sirota and Danielle Farina. Carrie is currently on the faculty of Greenwich House Music School, Bloomingdale School of Music and Larchmont Music Academy.
Carrie teaches Suzuki Violin and private violin lessons. 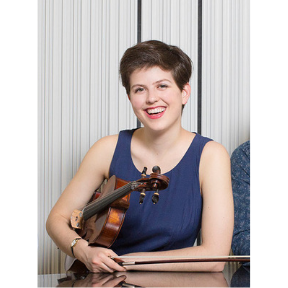