Derek Weisberg, began sculpting at a very early age starting with the medium of mashed potatoes as soon as he could hold a fork and knife, moving onto action figure assemblage when he could load a hot glue gun, and at age 7 he turned to the medium of ceramics, which was the beginning of his lifelong love and ultimate passion. He unwaveringly pursued ceramics sculpture throughout his childhood and teens, in Benicia, CA, where he was raised.

At age 18 he moved to Oakland, CA, to pursue his love for ceramics and art in general and attended California College of Arts and Crafts. At CCAC he received several awards and graduated with a high honors BFA in 2005. Since then Weisberg has co-owned his own gallery, Boontling Gallery, as well as curated numerous other shows. He has also worked with highly esteemed artists such as Stephen De Staebler, Ursula von Rydingsvard, Manuel Neri, and many others. In addition, Weisberg has maintained a strong and demanding studio practice, exhibiting regionally, nationally, and internationally. Weisberg has participated in over 90 shows in the last 8 years, and there are no signs of slowing down in the future. Weisberg currently lives and works in NY. 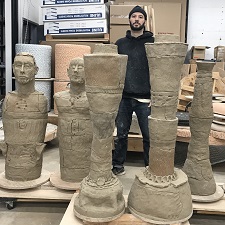