Eun-Ha Paek is an animation filmmaker and illustrator based in Brooklyn, NY who creates narratives that use humor to process the full range of human emotion. She brings the characters in these narratives into the physical world through ceramics, creating sculptures that are familiar and yet strange – at times dark, but always playful.

In the same way a boulder on a hill stores potential energy, a banana peel on the floor can be viewed as the set-up to a joke, storing potential “ha-has.” Knowing this might cause a smirk, without any real action taking place. My sculptures use this potential to construct narratives on the precipice of the familiar and strange; to explore grief and hope with humor. – Eun-Ha Paek

Paek has worked as an art director, graphic designer, animator and concept artist in a variety of media, including broadcast, web and print. She holds a B.F.A. from the Rhode Island School of Design, and has won a number of awards and grants for her work. Most recently, Paek received a grant from the Rudy Autio Fund for Creative Initiatives and was a Windgate Scholar at the Archie Bray Foundation. Her animated films have been screened at the Guggenheim Museum, SXSW, Sundance Film Festival and a number of international film festivals.

Paek is a long-time member of the GHP community and had a solo exhibition in the Jane Hartsook Gallery in 2015. As an artist in residence, Paek will work on a project that considers the mutability of memory. She will 3-D scan and print a hand-built sculpture, and then scan and print each subsequent iteration of the sculpture, allowing the regular defaults in the process to accumulate. In the same way that parts of a memory gain or lose resolution over time, the sculpture will slowly mutate with each remaking. 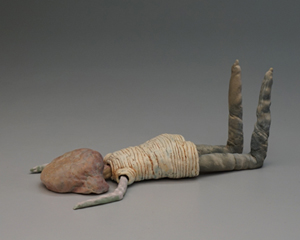