Oboist Hsuan-Fong Chen (pronounced “SHUan-fong”) has garnered a reputation as one of New York City’s most versatile musicians, with a career in orchestra, Broadway, new music, and occasional administrative roles. Having performed across the United States, Europe, and Asia, she is sought after for a wide range of performances, ranging from a guest principal appearance with the Metropolitan Opera Orchestra, sharing the stage with Rihanna at the 2015 Met Gala, and performing in the hit Broadway production of Rocktopia as its lead oboist, with an additional appearance in Wicked.

In new music, notable performances include the East Coast premiere of Nico Muhly’s The Faire Starre with Trinity Wall Street’s contemporary orchestra NOVUS NY, and several appearances with ensemble mise-en. As a soloist, she has given recitals and performed concerti with orchestras in Taiwan, Germany, and across the United States. Her album debut came in October 2019 on the Naxos label, when she recorded Beethoven’s Serenade for Winds alongside faculty from the Yale School of Music.

A musician from age four, Ms. Chen is a proud alumni of the Walnut Hill School for the Arts and has honed her craft through invitations to music programs and festivals around the world. In the United States, she has performed with the Aspen Music Festival, Spoleto Festival USA, and the Phoenix Chamber Music Society, among several others. Internationally, she has appeared in the Schloss Beuggen castle in Germany, as well as tours of Japan with both the Pacific Music Festival and the New York Symphonic Ensemble.

As an educator, Ms. Chen can often be seen teaching oboe at the Calhoun School in NYC, Music Advancement Program at the Juilliard School, in addition to her private oboe and piano studios. She is proud to have served multiple organizations of great renown as an administrator, including the National Youth Orchestra of China’s inaugural 2017 season as its Artistic Coordinator and Orchestra Manager. During her time with NYO China’s 105 students, she arranged performances with NPR’s “From the Top”, the WQXR artist-showcase, and their debut in Carnegie Hall that season, featuring pianist Yuja Wang as guest soloist.

A native of Taiwan, Hsuan-Fong Chen holds education from The Juilliard School (B.M.), the Yale School of Music (M.M. & Artist Diploma), and the Manhattan School of Music (Orchestral Performance Diploma). She was a former competitive pianist,  with notable achievements including a solo performance in Carnegie Hall after receiving first prize at the American Fine Arts Festival, as well as a documentary feature in the National Palace Museum’s historical film “A Museum Without Walls” alongside her piano teacher Da-Ming Zu. She is grateful for her former teachers, including Nathan Hughes, Elaine Douvas, Pedro Diaz, Linda Strommen, Liang Wang, and Stephen Taylor. She is based in New York City, where she lives with her Cockapoo, Hiro. 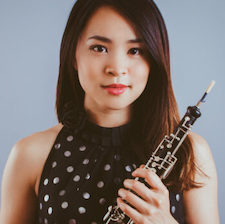