Cellist Louise Dubin has been a featured artist at festivals worldwide, including the 2017 Festival de Violoncelle de Beauvais (France), VioloncellenSeine Paris 2016 (the biennial convention of the French Cello Society), Bargemusic, Caramoor and Piccolo Spoleto. She has also performed chamber music recently with the Garth Newel Piano Quartet, the Artaria Quartet, Stephanie Chase and Steve Lubin at Music of the Spheres, Daniel Hope at the Savannah Festival, and at the Apple Hill Center for Chamber Music. She has also performed at the Norfolk Chamber Music Festival, the Tanglewood Music Center, and at many New York venues including Carnegie’s Zankel Hall (as the cellist in Stefon Harris’ “African Tarantella” nonet) and The Jazz Standard.

Her album The Franchomme Project (Delos, 2015) has won critical acclaim in the US, Canada, England and France. Her live performances have been broadcast on Fred Child’s Performance Today, and her interviews on Julie Amacher’s “Classical Tracks” (American Public Media) and Dacia Clay’s Classical Classroom (Houston Public Media) have been broadcast on NPR syndicates throughout the US. This year the solo cellist of Cirque du Soleil’s Paramour on Broadway, she previously served as Principal Cellist of the Auckland Philharmonia, the Charleston Symphony, and as guest Principal Cellist of the Swedish Chamber Orchestra. Indiana University awarded her the Graduate School’s two top grants for her doctoral research abroad in France. She was commissioned to write the Introduction to Selected Works for Cello and Piano by Auguste Franchomme (Dover Publications, May 2017). In addition to teaching private cello students, she has coached chamber music at Juilliard’s Pre-College, Apple Hill, and at the University of Auckland, and taught cello masterclasses at North Greenville University, Sam Houston State University, University of Connecticut, Grand Valley State University, Wichita State University and University of Virginia.

Louise on her teaching style:

“My teaching style relies on principles that use the body in healthy, natural ways. I also train students to rely on their own ears to make the cello sound its best. I encourage setting and attaining goals in the lesson as well as in home practice, and I also assign duets for students to play with me. Some examples of technical principles that my students of all ages learn: holding the instrument correctly and bowing in ways that utilize the natural arcing motions of the arm, learning how to release the natural weight of the bow arm into the string to make a ringing tone without pressing, and releasing left hand tension in non-playing fingers. Playing the cello is a detailed and disciplined endeavor and if not approached with care and experience can quickly lead to discouragement. In guiding my students, I help them avoid the frustrations resulting from bad habits. My students are spurred on by the good sounds they are making, and this motivates them to practice even more! Ultimately, my role is to supply my students problem-solving skills that they can return to, in greater depth, for a lifetime.” 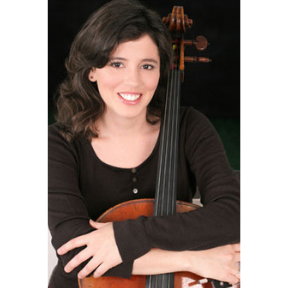