Margaret began her career at Greenwich House Music School as a faculty member in 1972. She became the Registrar in 1983 and has spent the rest of her career behind the front desk of the music school.

Margaret on her teaching style:

“I teach traditional classical flute to children and adults, the youngest being 8 years old. While maintaining a relaxed and easy-going atmosphere, I try to emphasize regular practicing which I feel leads to a sense of accomplishment and progress. Setting goals and having interesting method and solo materials are important to maintaining interest as are occasional performances.”
Margaret was educated at Boston University School of Fine Arts and Manhattan School of Music and holds a Bachelor of Music Degree from Manhattan. She studied flute with James Pappoutsakis and Harold Bennett as well as William Hebert, Maurice Sharp, Albert Tipton, Thomas Nyfenger and Barbara Peterson.

Margaret toured throughout the US with the Bolshoi Ballet, the Canadian Opera Company, the Norwegian Ballet, the Mitch Miller Chamber Orchestra as well as playing principal flute with the Blossom Festival School and the Aspen Chamber Symphony. She has performed (playing principal flute) under James Levine, Pierre Boulez, Robert Shaw, Sergiu Comissiona and Jorge Mester among others. She has also performed chamber music extensively throughout the Northeast. She is a faculty member at Greenwich House Music School. 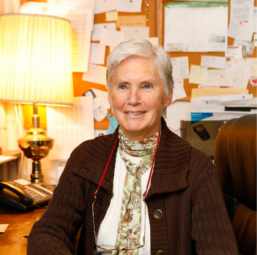