Puerto Rican singer, songwriter and musical theater composer MichelleJ. Rodriguez makes music that “span[s] laid-back southern soul and Latin pop flare” (NPR) and features “flourishes of bolero, bossa nova and even jazz” (Chicago Tribune). In 2018, she was a finalist for NPR’s 2018 Tiny Desk Concert Contest with her solo music project, MICHA. She has received support from Ars Nova, New York Theater Workshop, SPACE on Ryder Farm, Kentucky Governor’s School for the Arts and the University of Chicago. Musicals include East o’, West o’! (Ars Nova/ANTFEST), and works in development Jiran, Bibliophile,  Rokera. Ms. Rodriguez recently made her Public Theater début composing the music for The Mobile Unit’s production of The Tempest directed by Laurie Woolery, and she is currently under commission by the Public Theater for a new musical for their Mobile Unit program.

Michelle has kept up a rigorous international teaching artist practice, spending two years teaching music, theater and art at the Monteverde Friends School in Monteverde, Costa Rica and visiting King’s Academy in Madaba, Jordan twice as an artist in residence. In the United States she has worked fostering creativity and teaching songwriting and musical theater songwriting in the Montpelier, Vermont public schools, at the Summit School for Traditional Music in Montpelier, VT and in programs at the Chicago Public Library. Michelle was trained in voice as a high school student at the University of Kentucky under Noemi Lugo, is a proud public-school-trained violinist and received her BA in Theatre and Arabic Studies from Williams College in Williamstown, MA, where she studied cabaret and performance with The Bengsons and songwriting with Bernice Lewis. 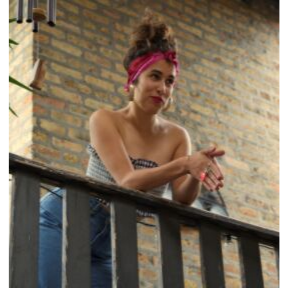