Nicole was born and raised in the Lower East Side. She was the beneficiary of theater programming throughout her youth as a student at Henry Street through graduation from HS of Performing Arts. After studying at the Moscow Art Theater Conservatory, she co-founded Studio Six, a theater dedicated to cross-cultural exchange. Working abroad she learned the value of theater as a language that bridges difference and creates understanding. After years of acting professionally, she attended CUNY’s Applied Theater Master’s Program. She has since taught theater at Butler University and the Department of Corrections of New York. She has devised and co-facilitated workshops on inclusion, using theater as a forum for change in urban and rural communities. Nicole is bringing community-centered theater classes and workshops across the Greenwich House organization. From Playbill’d, a youth devising class and camp, to workshops with older adults and parents, Nicole uses theater as a process for reflection, engagement, and education 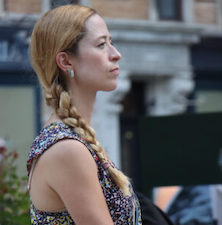