Rachel Black is a native of Mississippi, and joined the Music School in June 2013. She has begun several new initiatives such as new public school outreach programs with PS 3, PS41, and the Museum School, Suzuki Violin/Guitar, Healing HeArts, a joint music therapy program with Greenwich House’s Children’s Safety Project and a fundraiser for the scholarship fund, Play it Forward. She is the co-founder and executive producer of Uncharted, a community concert series for GHMS, which features local artists premiering new work or new collaborations, with all ticket proceeds going directly to the artists. She is a founding member of the New York Presenters Consortium (NYPC), a group of presenters dedicated to furthering the newest work of musicians and performers in New York City. NYPC members include Lincoln Center’s David Rubenstein Atrium and Joe’s Pub.

Rachel is a classically trained actor and a graduate of the American Conservatory Theater’s MFA program. She has worked in film, television and theater. Selective film credits include Michael Clayton, Inside Man, The Bourne Legacy, Men in Black 3, and Law and Order. She has worked Off-Broadway, and at the Atlantic Theater, McCarter Theatre, Magic Theater, and the American Conservatory Theater.  She is a member of SAG-AFTRA and Actor’s Equity. 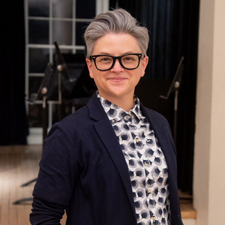