Samuel Johnson is best known for his wood-fired utilitarian pottery. Johnson is interested in “shadow” or the concept that there is an aspect of our personalities that is hidden from our consciousness but affects us nonetheless. He connects this to humanity’s capacity for order and mathematical precision while simultaneously being half-wild and full of biological and spiritual mysteries. For Johnson, the dark, varied surfaces that result from the wood-fire process reflect these ideas. He throws symmetrical forms and then beats and scrapes them into slight disorder before exposing them to the extreme heat of the kiln, which amplifies the stresses he puts on the original form and adds color and wood ash unpredictably to their surfaces. In Johnson’s eyes, the finished pottery resembles what it means to be human: mysterious and natural with the capacity for beauty, reason and imprecision.

Johnson was born on the Eastern prairie of the Red River Valley. He studied painting and ceramics at the University of Minnesota at Morris and served a three and a half year apprenticeship in pottery under Richard Bresnahan before studying Scandinavian ceramic design in Copenhagen at the invitation of Denmark’s Design School while working at the International Ceramic Center in Skælskør. After working for a short period in a studio in New York, he traveled to Japan as a studio guest of Koie Ryoji. In 2005, Johnson earned graduate degrees in fine art from the University of Iowa. He currently serves on the Board of Directors for Artaxis.org, an international artist organization, and is a Professor of Art at the College of Saint Benedict and Saint John’s University in Central Minnesota.

Johnson is planning to use his residency at GHP to develop new forms in utilitarian ceramics. 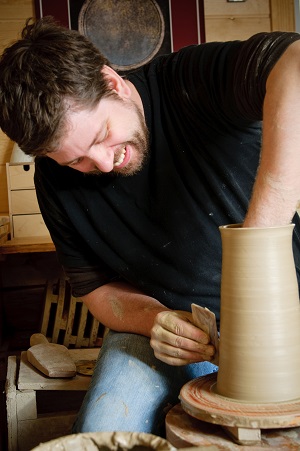