Skyla Budd is a versatile harpist who has received her Bachelor of Science Degree in Music Performance at Adelphi University and her Master’s Degree in Music at The Mannes School of Music.  She has performed in traditional and nontraditional venues, such as, Alice Tully Hall at Lincoln Center, Carnegie Hall, the Governor’s Comedy Club in Wantagh, the Cinema Arts Centre in Huntington, and the Museum of Modern Art in NYC. She is the founder of a unique chamber group of harp, guitar, and flute called Trio Delphi. The trio has performed at various events and concerts throughout the greater New York area.

Skyla has been part of the Mannes American Composers Ensemble (MACE) with conductor David Fulmer and the Charlie Parker Jazz Festival with conductor Keller Coker. She has performed at the LIU Post Chamber Festival multiple times, and was a soloist with the Chamber Orchestra when they performed the first movement of Handel’s Harp Concerto in B-Flat Major.

Skyla is a freelance harpist who performs with different orchestras, plays at weddings, and also appears at many other special occasions. She has a growing private teaching studio on Long Island, New York. She is the harp instructor at Greenwich House Music School in the West Village in New York City,  and she is so excited to be part of the Midori and Friends x The Lyra Society teaching artists. 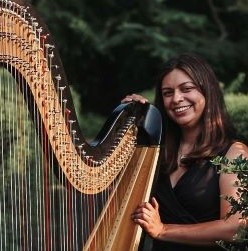